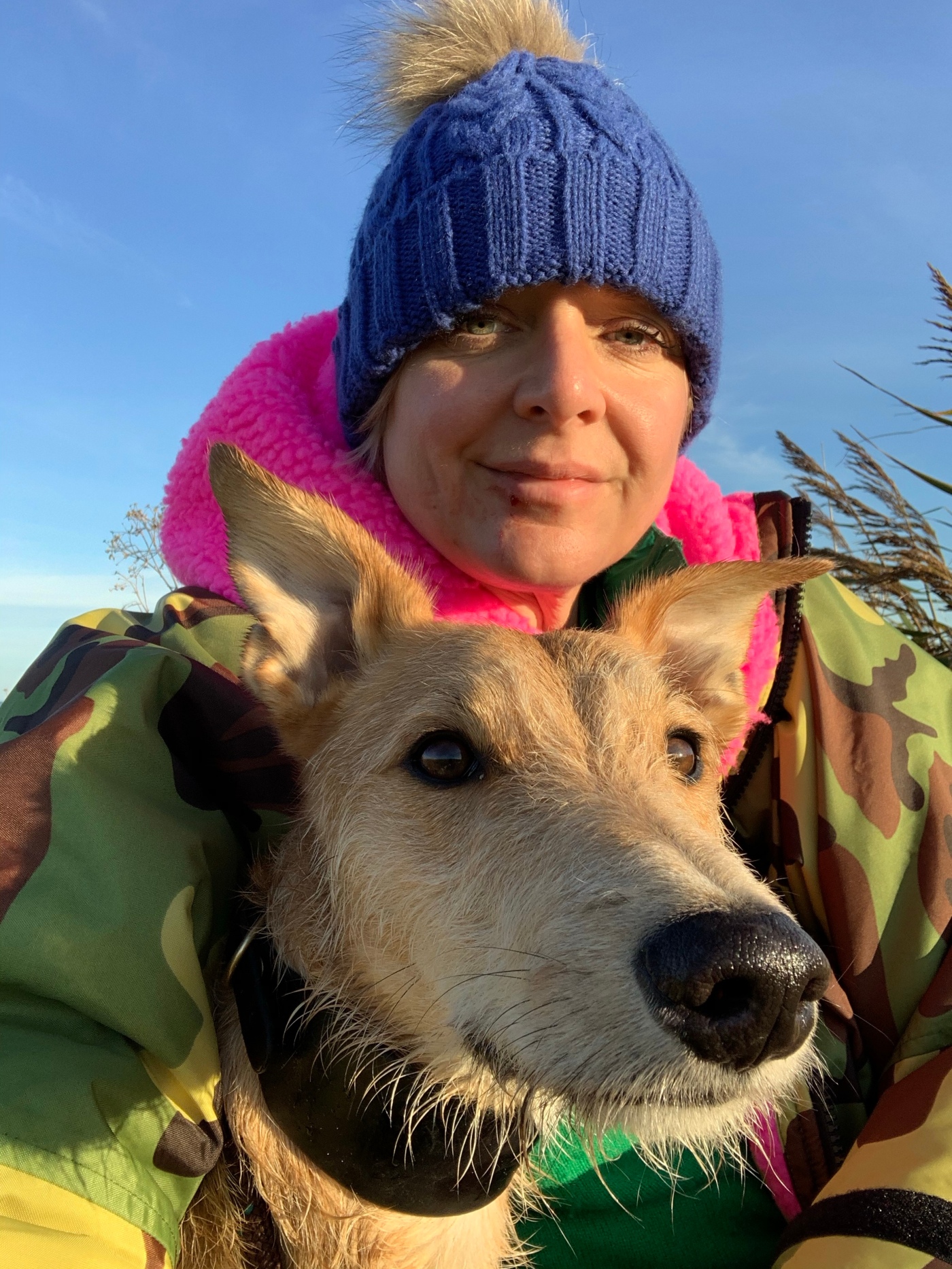 I should know from experience that, as with your children, one should never assume that one’s dogs, (if you are lucky enough to have multiples) will all behave in the same way when faced with certain situations, simply by dint of belonging to the same family.

Readers of my earlier blogs might remember a phenomenon known as ‘A Mummy Adventure’. The term denotes a type of escapade, dreamed up by Yours Truly, and designed to provide maximum fun and adventure, usually in the great outdoors, while simultaneously exposing the unwilling participants to a sliding scale of discomfort, with the added frisson of potential bodily harm.

As of today, both my dogs are now familiar with this term.

The weather forecast app told me it was going to be sunny, and my cold-water immersion withdrawal symptoms are becoming critical owing to the second lockdown forcing the closure of my favourite swimming spot. So before cold turkey turns to complete catatonia, I decided to pack my swim bag for a trip to the seaside, scheduled for about 1300hrs to coincide with high tide. As it turned out, Danny, my nominated ‘support team’ was snowed under in the office but I rationalized that, with the faithful hounds in tow, and no doubt plenty of passers by to initiate a Baywatch-style rescue or, should it be necessary, give the RNLI a tinkle, I would be perfectly fine without him.

We crossed the little pebbled stream just south of the Fraisthorpe car park, our faces soaking up the rare golden sunshine, and took a short walk beside the low breakers. Poacher and Badger would have squealed ‘Yaaaaaay!’ if they could, as I let them off the lead. Away they careened, weaving delightedly between rocks and heaps of seaweed garnished with crab shells, everything a delicious distraction and a fragrant change from the usual damp mossy places they are used to in our landlocked valley. It was only Poacher’s third time at the beach and he still had lots to learn…

Sheltered from the sea breeze in a cove of low brown cliffs I found the ideal disrobing spot where I could discreetly prepare for a dip. I carefully placed my clothes neatly in the correct order so that when I emerged form the icy North Sea, I could quickly layer up and avoid the dreaded ‘after drop’ I’ve been reading so much about since the whole world discovered open water swimming.

At the water’s edge I practiced a moment of the Wim Hof breathing method, expanding my diaphragm and sucking in healthy lungfuls of salty air. Checking both ways to make sure I wasn’t likely to elicit concern from passers by or be dragged off by men in white coats, I even did a little Horse Dance (The actual term is horse stance, but where’s the fun in that?) to make sure my blood was flushed with oxygen and perfectly ph balanced. (On Tuesday I did a two-hour Zoom seminar on the method, with Emma Estrela, can you tell?) With a quick glance back to check on the dogs, both of which were nose-down, lost deep in beachcombing heaven, I waded purposefully out into the grey blue waves. Just as I reached a point about 10 meters out, where I could plunge in over my shoulders I became aware of a frenzied sploshing and panting immediately behind me and turned to find Poacher’s upturned snout, almost submerged in a passing wave as he reached me. His rolling eyes, like that of an out-of-depth wildebeest calf crossing the Okavango on the Great Migration, told me that he wasn’t so much rescuing me, as asking to be SAVED. I instinctively put my arms around him, as I would a small child, expecting him to rest comfortably there and take a breather, but instead, like a drowning man he clung to me as if to life itself. Wrapping his great long hairy arms around my face and using his hind claws to get a purchase on my back, chest and, eventually shoulders, he found his way to the top of my head, trembling, his cheeks flapping with little whimpering puffs of relief, and his big heart thumping against my ear.

I had no choice but to abandon my swim.

Wearing this precarious, great quivering dog-hat of slick golden fur, I emerged from the water, one arm held up to steady his wobbly bulk, all the while soothing him with reassuring words and coos. I cannot begin to express how grateful I am that no human witnessed this pageant. A dripping nightmare version of Botticelli’s Birth of Venus in a hot pink swimsuit, hands and feet adorned in elegant black neoprene, and with glistening blue thighs mottled with the stinging Bridlington Bay waters, much of the exposed skin on my upper body had been shredded in the flailing of drowning dog paws. During the ungainly dismount, Poacher’s dewclaw, like the eviscerating hook of a velociraptor’s talon, had torn my bottom lip, and several other cuts opened into little ribbons of blood that trickled down my body.

I hadn’t thought it possible to love Poacher any more than I already did, but ironically, at that moment (possibly a little high on adrenalin) it occurred to me that I had just witnessed the absolute loyalty of a faithful hound that was willing to die by my side. I rubbed him gratefully with a towel, and he skipped and frisked about me, pumped with excitement and relief.

All this time, old Badger had remained singularly unimpressed by the whole episode. He had continued his blinkered rootling and snuffling along the shoreline, punctuated by frequent wee-stops, and when he paused to observe the rescue, it was with disinterest. I thought I detected a smug Craig Revel Horwood sneer on his little black lips, the sort I get from my teenage children when they disapprove of my antics, and he certainly wouldn’t give a damn if I went and drowned myself. He was probably already wondering which pocket of my Dryrobe the chocolate brownie was in (as was I, to be fair).

Selfishly, and in a way that only a stubborn human could, I looked for a solution to this frustrating issue; that of a much-anticipated therapeutic sea-swim abruptly curtailed. I considered knotting Poacher’s lead into a clump of marram grass, but it was clear he would soon work it loose. Casting about along the beach for a rock big enough to hold him still, I tied one end of the lead round a large chunk of loose concrete, and beckoned him to come closer and have his collar hooked up to it.

For the second time that afternoon, I was grateful not to have been observed. Witnesses would have recounted to the jury how, not only was this deranged half naked woman’s behaviour very strange for a chilly November day on the Yorkshire coast, but the cruel monster was evidently about to drown her beautiful dog by tying him to a rock and throwing him into the sea!

It finally dawned on me that it was time to abandon this particular ‘Mummy Adventure’ and so I turned to the neat pile of clothes and towels waiting for me back at the cove, to find that they had been scattered by a delighted young wet dog who was now kicking them in the air and rolling in them, to make sure a liberal dusting of wet sand coated the lot. Ridiculously, I love him to pieces, and now that we have saved each other’s lives, we belong to each other, forever.

Nobody heard him, the dead man,
But still he lay moaning:
I was much further out than you thought
And not waving but drowning.

Poor chap, he always loved larking
And now he’s dead
It must have been too cold for him his heart gave way,
They said.

Oh, no no no, it was too cold always
(Still the dead one lay moaning)
I was much too far out all my life
And not waving but drowning.

DISCLAIMER: I am in no way comparing myself to the drowning man, I just thought it was an apt piece given that so many of us are struggling with the world we’re in at the moment. Everyone needs a buoyancy aid now and again. Mine frequently take the form of long phone calls with my mother, long SD walks with good friends and now, brief swims with my dog! I’m very lucky.

2 thoughts on “A Funny Thing Happened At The Beach.”