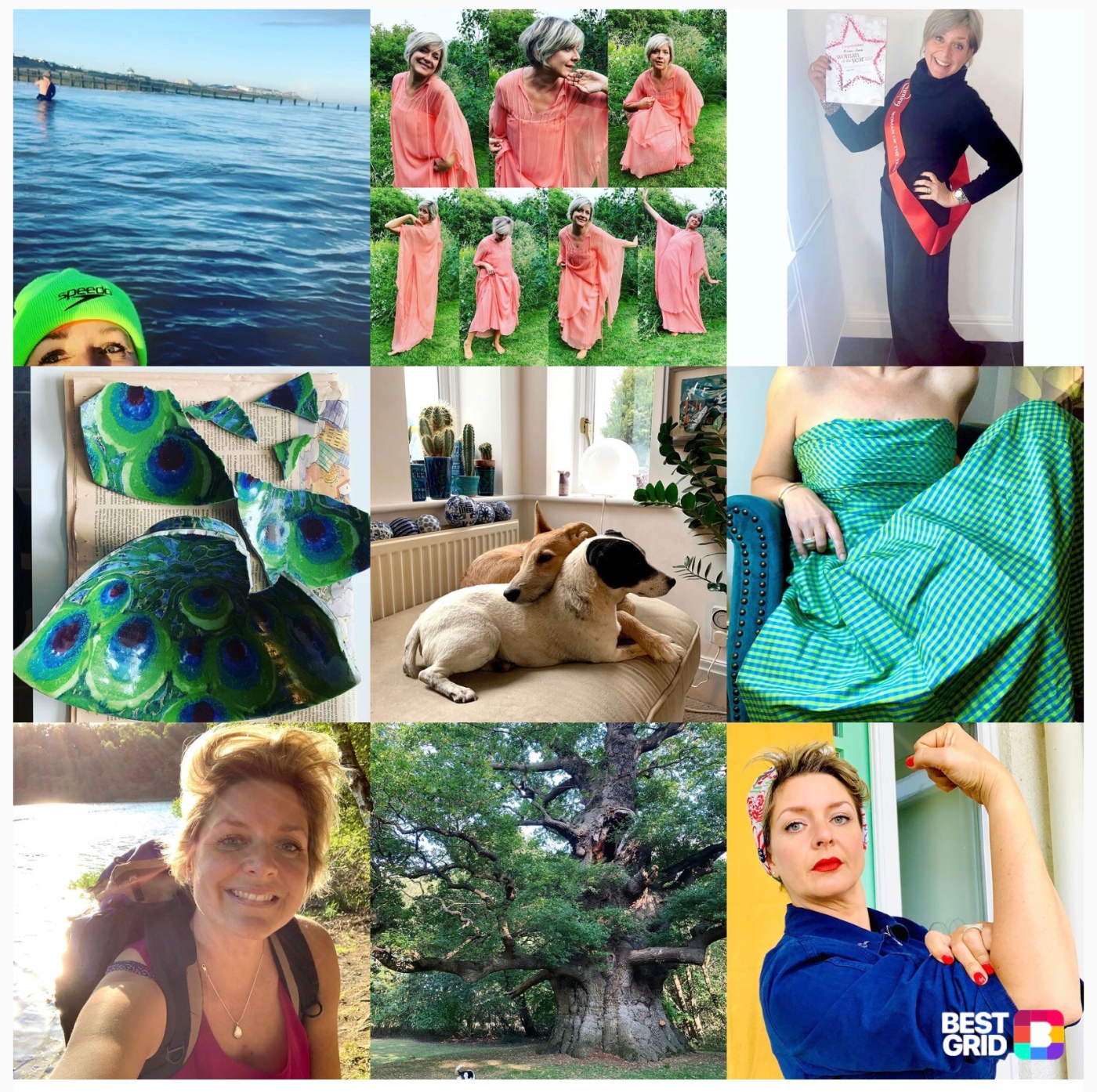 I am self-aware enough to recognise that much of my existence these days, particularly in this post pandemic world of physical isolation from other hoomans, is lived increasingly through the demon conduits of social media platforms.

Like everyone else, I sat through The Social Dilemma aghast, appalled and sickened, only to wake the next morning and absentmindedly check my feed. Had some well-meaning do-gooder slapped the phone from my clammy, affirmation-seeking mitts, I might well have attacked with the ferocity of a rabid tiger, so vital to my existence it has become to see if someone I knew 30 years ago liked my latest dumb-ass selfie.

This perverse and unnatural behaviour in someone who grew up in a halcyon pre-internet era, when a day spent making mud pies in the woods, rounded off in front of the Radio Rentals telly watching TOTP would amount to ‘living my best life’, demonstrates how a (relatively) normal and intelligent person can become so willingly bewitched by this seductive oxytocin-laced matrix of artifice where the only escape is superhuman self restraint.

There’s no excuse. I could lay the blame with my decision to give up work and become a time rich SAHM, thus rendering my brain enfeebled and vulnerable to control. I could blame COVID, (everyone else does, for everything). I could also blame the evil-genius corporations for devising a perpetual evolution of algorithms designed to ensnare and enslave unsuspecting passers-by like a giant black widow spider in her web of doom. However, just as my Slimming World consultant says about over-eating; no-one held me down and made me swallow it. I did it myself.

I once attended a seminar by Dr Aric Sigman on the effect of too much Discretionary Screen Time on the human brain…which I Tweeted about immediately afterwards.

Four days ago, perhaps in a compassionate effort to cure me of this modern affliction, a hacker, (the poet in me likes to picture them working from home, holed up in a squalid little bedsit, choking on the reeking miasma from Wuhan’s rat infested wet market) infiltrated my email address and briefly took control of my online identity.

The first warning I had of this activity was a window popping up on my iPad to let me know that someone was attempting to log into my Apple account from an IP address in Castleford. This was shortly followed by more mystifying little windows of the same ilk, all with tiny maps indicating other likely locations of the persistent miscreant, including Yapham, just six miles away. I felt like the little pig in a house of sticks while outside, the BBW, hungry for steamed pork balls, huffed and puffed. There was a momentary standoff as I frantically changed all my passwords, but eventually, that wolfy bastard somehow blew my virtual house down and all my accounts disappeared. Pouff!

Apparently my picture ident on Messenger suddenly changed to an anonymous grey silhouette, like an interview with someone on Crimewatch, and my new name, for the witness protection programme, became ‘Unknown User’.

As it happens, all of this took place on the same day that I had taken a bleary-eyed drive to the coast for a chilly dawn swim with fellow Porpoises to greet the rising sun. (An occasion that merits an entire blog in itself, and one that will be forthcoming after I’ve got this one off my chest) A surreal and extraordinary start to a day that, in the event, got a lot weirder. I mention this because it was one of my swim buddies that alerted me to the fact that I’d gone all ‘under cover’ on our post-swim group chat. He cleverly traced me here to my WordPress page and left a message. YAY! for WordPress, which was the only online platform to fend off Wuhan Willy and remain uninfected and secure from evil infiltrators.

As the dire warnings continued to flood in from Facebook about my knobbled account, I submitted an appeal which promptly triggered the following response,

‘If we still find that you are not old enough to be on Facebook, your account will remain disabled’

Now it’s been a long time since a checkout operator has scanned my bottle of Absolut, looked me in the eye and asked to see my Proof of Age ID, and in different circumstances I might even have been a teeny bit flattered, but instead the dawning realisation that my account might be irrevocably buggered by a cyber criminal left me feeling hollowed out and violated.

I could no longer log into any account that held my email address as ID, I was locked out of Twitter, Facebook, Instagram, Google, My BT, even Quora, while my imagination ran wild envisaging the very worst that a money-hungry bat-muncher might do with my precious online persona. I couldn’t even open fresh accounts because all my personal details remain the same, and can’t be duplicated. I felt helpless and stupid.

Oh, and INSTAGRAM! My face and neck prickled at the thought of @ejjamane, my carefully curated visual diary, the legacy I hoped to leave for my grandchildren to probably not be very interested in, now destined for dusty incarceration in a Utah server, languishing unseen for a cyber eternity. Until this point it had never occurred to me just how dearly I valued this online outlet for exercising my creativity, limited as it is these days. No more #frockfridays, no more scrolling back to remember special, and not-even-that-special but still beautiful moments from the past six years of my life, and *sob* no more hilarious @celestebarber parodies.

But then… almost imperceptibly at first… I began to experience a very peculiar new sensation. I think it was relief. I’m not sure, but I might have sensed the gentle loosening of shackles, easing of a tyrannical yoke. Like a human sacrifice, I offered myself up to this new unencumbered state of pure being. I was re-born, my social media virginity made whole again. I took off the rose tinted ‘Gram goggles and crunched them under foot.

In the days that followed I discovered bonus pockets of time in which to complete tasks long overdue. The toilet bowls gleamed like never before and the hall carpet now contained only trace elements of dog. I baked a ham. I went for a run and didn’t broadcast the fact. I even scheduled a tea break where I read a ‘magazine’, you remember, one of those papery things we girls used to take on boozy picnics with salacious gossip columns to pore over?

The timing of this hiatus in social media interaction couldn’t have been more fortuitous given that I would most likely have found it almost impossible to remain tight-lipped about Harry and Meghan’s Oprah interview and I would no doubt have wasted more angst-ridden time fending off an army of angry trolls as well as my pet hacker.

My email inbox was suspiciously empty. I reported my abuser to the nice man at BT who was able to see that my account was blocked after someone had repeatedly attempted to gain access with the wrong password. I felt a little lurch of disgust followed by a warm feeling of triumph, knowing that I had repelled that little parasite with my hasty password changes.

However, pompted by the apparent lack of IT nouse this ordeal had exposed in me, I made an appointment to see my local friendly IT expert at CMB Computers to update all my devices and check them over for residual infection. He was reassuringly understanding and advised that if I was persistent, my messages to Facebook might eventually filter past their frontline defence of automated bots and reach a sympathetic human. BUT, he warned, this might not happen before the 30 day cut off, after which I would be lost forever.

Meanwhile I was resigned to facing a bright new future, one without a digital outlet for my self-promotion, without the means to curate an ideal image of my life for the outside world to marvel at. I stopped looking for ‘grammable’ shots in the everyday. I even considered starting to write that book! From now on I would keep all my petty thoughts and political opinions to myself, use smoke signals to arrange tandem sea swims, and be happy, even if I’d never find out if it was just me who laughed at the sex scenes in Bridgerton…

Then, at 0937hrs yesterday a message from Facebook pinged into my mailbox. Mark had read my letters and he’d let me BACK IN! I was no longer cast out into the desert of real life, my poor mummy, 300 miles away could once again keep tabs on my daily comings and goings, reassured I wasn’t drowned or abducted, and now my grandchildren could jolly well endure endless pictures of Grandmama living her best silicone life.

I should have been happy. It was an odd deflated feeling, tempered with enlightenment. I did not rush to catch up with three days of FOMO, instead I kept a wary distance from my iphone and continued my daily routine skirting round it. The truth is, my weekly screen-time reports had been growing steadily more like those of an average Tiktok obsessed 14 year old. In other words, huge chunks of my precious life were being swallowed up into the inescapable vortex of endless swiping and clicking: exactly what They want. Every second I spend gawping slack-jawed at a @mammastillgotit video, feeling inferior to her fabulousness, clocks up a massive “$$Ker-chinggg!” in Mr Zuckerberg’s cash register.

I’m not going back there.

The next notification I received from my friend Mark yesterday was a jolly little memo regarding my exciting new Facebook ad campaign which was scheduled to run any…minute…NOW! Apparently I had budgeted £999.00 a week to pedal some spurious Chinese shite to all my friends. (Wuhan Willy strikes again)

More face prickles, this time I was fuming. On his brief visit, the hacker had laid a fat cuckoos egg in my account and it was about to hatch. I needed to squash it, but it took me a moment to gather myself enough to access the Ad Manager, whatever that is. As I selected ‘deactivate’ on the hacker’s ad it felt so good, better than all the successful tick removals I have ever carried out on my pets.

It turns out that Facebook have been aware of this kind of hacking scam for years. Fascinating: They only stop the campaigns when the money runs out. In my case that would have been on Day 1, but that’s not the point.

Dear Chinese hacker, I might hate you right now for making my skin crawl and lobbing a grenade into my peaceful little world, but I understand you have a business to run, and maybe children to feed. The world is a horrible place and it’s dog eat dog (no racist pun intended). But I am also grateful to you for opening my eyes to the ever present threat that living life online poses, not only to my bank balance, but also to my sanity. From now on, I promise to try and fill every one of my spare unforgiving minutes with sixty seconds worth of distance well and truly run, (and not go on about it in public so much). Thanks, Mr Kipling!

EDIT: I have since translated the FB advertising campaign that the hacker planted in my account and discovered that it was written in Vietnamese and offers 200 pieces of Phu Quoc pearls! I thought it was right and proper to correctly identify the nationality of the perpetrator. Sincere apologies to China x

If you have been affected by any of the issues in this blog go to this address for up to date and helpful information.

2 thoughts on “HACKED OFF”